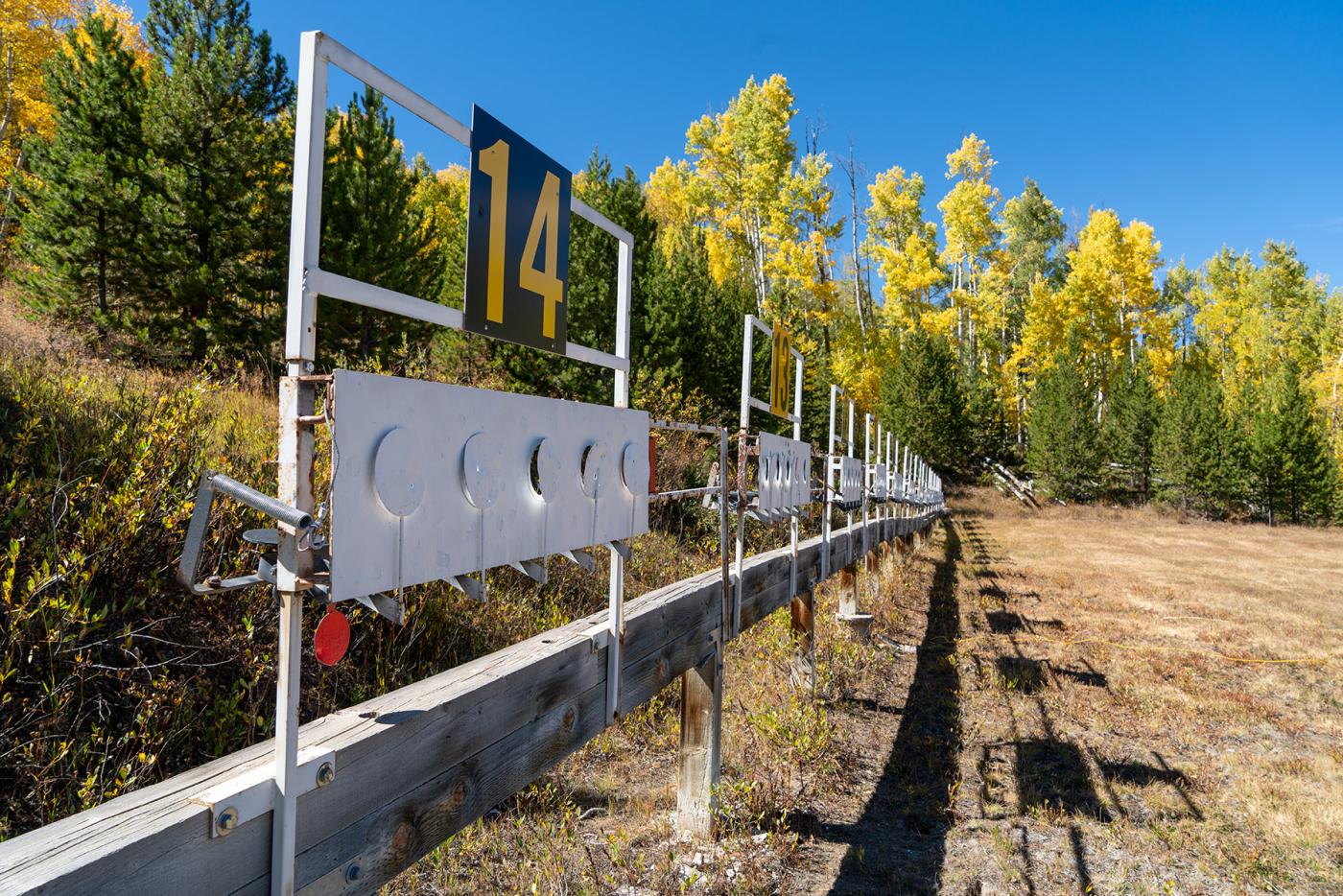 Arm sling: A belt used to stabilize the rifle and the biathlete’s arm while shooting in the prone position.

Clicks: Slight adjustments for wind, sun angle and temperature are made by moving the rear apertures of the rifle sight in different directions. The amount of change is measured by clicks turned. Prior to an event, coaches assist athletes to make adjustments, however, although coaches chart each shot taken during competition using magnified spotting scopes, they are not allowed to call out corrections to the athletes during a race.

Clip/Magazine: Used to hold five .22 caliber rifle cartridges. Up to four clips can be stored in the rifle stock while the biathlete skis the course. At the range the clips are taken from the stock and inserted into the rifle as needed.

Chase group: Biathletes in the pursuit event who start the race after the gold medalists of the individual event and sprint event are given a head start.

Declared rounds: In relay events, eight bullets are carried in each clip. The five-round clips are used first in an attempt to hit all five targets. If more rounds are needed, the extra, declared rounds may then be hand loaded one at a time to attempt to knock down any remaining targets. For each target not hit the biathlete must ski one penalty loop.

Firing lane: The 50-meter (164 feet) space between the firing line and the target in the shooting portion of the competition. Competitors shoot from different lanes.

Fortner Action: Made by Anschutz, the preferred type of rifle action used in biathlon. The “straight-pull” action is pulled back to eject the spent round and pushed forward to load the next round into the chamber from the magazine.

Handover zone: Marked by red lines, the area of the relay course where one teammate tags off to the next teammate.

Penalty loop: Loop of 100-400 meters that must be completed when targets are missed. One loop is required for every target missed and takes anywhere between 20 and 30 seconds. In some race formats we may opt for no penalty loops, instead a one-minute penalty is added for each missed target.

Prone position: Lying down on the stomach, used while shooting. The rifle can only be in contact with the athlete’s hands, shoulder and cheek.

Shoot clean: Act of hitting all five targets during one shooting stage, also known as a shooting bout.

Shooting mat: A non-slip mat from which a biathlete shoots.

Sights: A biathlon rifle is equipped with two targeting sights. A biathlete will peer through a rear site, which is attached to the rifle action, just above the firing trigger. The rear sight features two zeroing knobs. One knob adjusts the vertical position of the sight, while the second allows for horizontal changes. A front sight is mounted to the end of the rifle barrel, and has a special snow cover which is kept closed while an athlete is skiing on the course. Upon entering the shooting range a biathlete will quickly open the cover before shooting. Neither sight is magnified.

Standing: The shooting position where athletes stand without any support. The rifle can only come in contact with the athlete’s hands, shoulder, cheek and chest next to the shoulder.

Targets: Targets on the range start out black and once hit a white metal plate flips up in its place. Target area size differs for standing and prone targets:  11.5cm (4.5in) diameter for standing, and just 4.5cm (less than two inches) for prone.

Zeroing: Time spent before the race shooting paper targets to align the rifle sights. When zeroed, the rifle is accurate for the particular wind and light conditions on the range at that time. Biathletes may also make adjustments to their sights during a race.